Well we thought it was a good idea!

More of the items in the collection may be found HERE

Posted by Boffins Bunker at 08:30 No comments:

When one gets knocked off the pony, getting back up and into the saddle is not always as easy as it sounds.
But I'm trying.....Please watch the video
...and now please follow this link
#Steampunk, #Witchcraft, #Natural History, # Male Sculpture, #The Quirky & #The Strange
Posted by Boffins Bunker at 07:24 No comments:

Getting back on the horse & in the saddle is all very well...as long as there are not 'idjuts' constantly frightening the horse.

... so back to serious laboratory tinkering.
Posted by Boffins Bunker at 07:39 No comments:

With so many species on the CITES endangered species list it is always good news when a crypto-zoological creature is saved from brink of extinction.
That's what has happened in Cornwall (UK) thanks to brilliant work of Professor Boffins Bunker (me).  The incredibly rare & seldom before seen Cornish Coppermine Nautilus has now been successfully breed in captivity in Boffins secret steampunk laboratory in Cornwall.
What is known about Cornish Coppermine Nautilus?
Cornwall is extremely rich in mineral deposits like tin, lead, copper, even gold & has been extensively mined over millennium from pre-Roman times to the point where certain parts of Cornwall are like a Swiss cheese, with many holes & tunnels boring through it (ex. St. Day & Redruth).
What is far less known are some of the crypto-zoological species which are now said to inhabit these primarily abandoned cave & mine tunnel networks. For example the Cave-mouth dwelling Cornish Copper legged tarantula or the aquatic Cornish Coppermine Nautilus.
Cornish Coppermine Nautilus are thought may originally have been marine cave dwelling creatures from around the Cornish coast which have subsequently found their way into flooded mine shafts & tunnels.  Here they have adapted & evolved to live in such a hostile heavy metal mineral deposit environment.
The Boffins laboratory breed species go through various stages of development:-

Boffins said; "We are delighted with our laboratory successes to date in proliferating  these rare & lesser known Cornish creatures.  Whilst we deplore some irresponsible genetic DNA tinkering & Frankenstein like modification between non-related species, we ourselves are at the very forefront of pushing the boundaries of pseudo-science crypto-zoology in Cornwall.  In time we hope to bring even more lesser known species to the attention of a wider public, funding permitting"

Besides the Cornish Coppermine Nautilus, there are a already number of crypto-zoological species quite unique or rare to Cornwall which have successfully come out of the Boffins Laboratory.  These include various Fiji-mermaid like creatures, the previously mentioned copper legged cave tarantula, & examples of what some have referred to as 'dead-fairies', plus the aquatic Cornish pasty crimped jellyfish species.

Posted by Boffins Bunker at 04:01 No comments:

The sterility of minimalist interior fashion decorating has dominated UK homes in recent years, but there is a quiet counter move going on.

The good news is the 'Cabinet of Curiosities' room is back in favour with some (including some within the Steampunk movement).  Collecting of interesting objects & artefacts has also been made far easier with accessibility of the internet.

There those seeking out the 'different' & who clearly do not want mundane, boring bland beige sameness of smooth mass produced 'ticky-tacky' one piece injection moulded plastic seemingly created more for benefit of modern manufacturer & retailer, than the customer.

In recent years there has been a steady surge in collecting of Surgical Antiques & Macabre Anatomical Medical Pieces.  Many of the more spectacular prized early pieces already housed in private wealthy 'Cabinet of Curiosities' collections & museums.


The downside is prices, sometimes of thousands of pounds are being fetched at Auction for such antique anatomical pieces & are well beyond the shallow pockets of the Boffin.


The Boffins Bunker Anatomical figure (centre of picture above & in image below) has been created by using a car boot purchased former child's toy 'Man of Action' (or GI Joe).  Wrapped head to toe, mummy like, in masking tape.  Coated in Black ebonised French button polish. Decoupage with a copyright free anatomical illustration printed off on computer.  Applied with PVA glue.  When dry, polished with Dark Tan shoe polish for the aged patina & wax effect.


Posted by Boffins Bunker at 09:00 No comments: 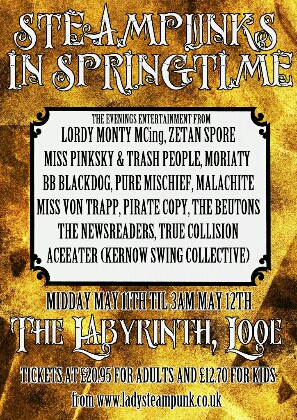 Unfortunately Boffin has to be doing something else today.
So here is a picture of a poster of a STEAMPUNK EVENT
(Steampunk in Springtime) taking place in Cornwall (UK)
on
May 11th 2013.


Further details can be found via this Steampunk Cornwall link
Posted by Boffins Bunker at 03:02 No comments:

Get sticky fingers, glue on gears & call it Steampunk

Now please don't get me wrong, I think the video below is very clever, really funny, both accurate & also skewed in equal degrees.


Perhaps one thing the Boffin liked & drew me to steampunk is my 'theory' it encourages people to personal creativity at many different levels.  The 'theory' that anyone can join in and have a go at 'steampunk'.

...and for some that may mean simply 'Gluing some gears on' something.

That includes the Boffin to a greater or lesser degree, who just likes to tinker with resources available.  Those resources being (1) personal level of ability (2) materials I can afford/access.


However having sniffed around the steampunk world there is a definite whiff of elitist snobbery  wafting up from behind a veil of otherwise polite & congenial conversation generally encountered in Aether web online steampunk circles.

Much of this 'from beneath petticoat snipping' seems aimed at some eBay & Etsy contributors. (No, the Boffin does not sell on Etsy or eBay, but who is to say I won't?)

Ok, yes, the Boffin concedes there are some truly awful screaming gaffs out there for sale masquerading as steampunk. Some of which elicit even from the Boffin a response of 'you are joking', (Which is why there is the saying :- 'Caveat emptor'... Buyer Beware), but there are crafters genuinely skilled, creative & finding their own style, level & abilities...and having fun & maybe even making a penny or two!

There really are some stonking creative, skilled & astoundingly talented people contributing to the craft of steampunk aesthetic/genre.  Some more or perhaps differently skilled than others. Boffin weeps in complete & unabashed jealousy at the mind boggling talent abilities of some to create wondrous works of art, be it an object or like clothing that Boffin cannot even aspire too stitch together (as some steampunk clothing are surely a work of art).

﻿
Britain's certainly got talent, (as have some resident crafters/artists in Cornwall) but in levels of physical & craft creativity which is often overlooked,  as demonstrated by the UK government expressed intent to drop crafts from list of creative industries

Having seen what is sometimes considered & constitutes as highbrow 'ART' by elitists drawing up the short list for such as the prestigious Turner Prize award, actually gluing some gears onto 1980's plastic tat & spaying it copper & calling it Steampunk, in comparison the Boffin finds sticky fingers to be most creative (& therapeutic) indeed.

This Boffin will continue to glue on gears & calling it steampunk.

Posted by Boffins Bunker at 04:40 No comments:

It's all self-explanatory if you watch the video. 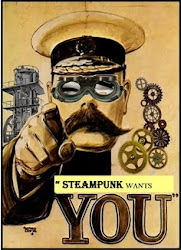 Steampunk Empire: Tell them I sent you!

Websites & Blogs liked by the Boffin